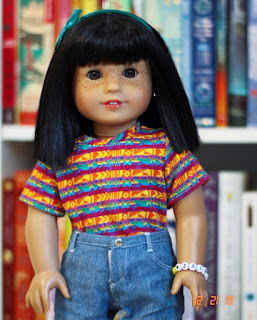 Zaira runs this blog, although over time it has become more and more of a collective project between her and her friends. She loves fashion, and through a fashion journalism project for her school communications class, she stumbled across a love for writing and sharing stories as a whole, prompting her to start Worldwide Dolls. Zaira's family is from Japan.

(Zaira is a retired historical Ivy doll with custom freckles.) 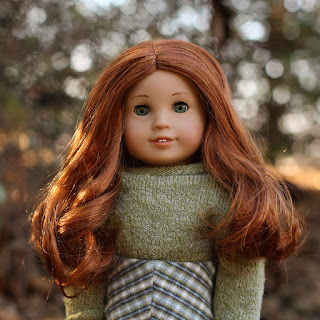 Eve is Zaira's best friend and, in Zaira's words, her "right-hand gal pal". She loves to take photos, making the two a great pair when it comes to blogging. She also loves music, and plays the piano. Eve is half-sisters with Georgia. Eve has two moms, and her family is from Ireland. 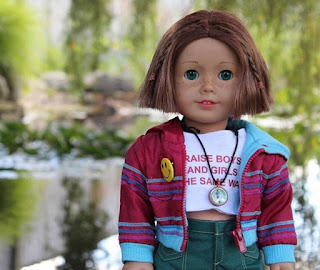 Piper plays on the football and soccer teams at school and really tries her best to be friends with everyone. She used to live in Ireland, while her father was employed there, and he now runs the newspaper on the island. She's cousins with Nikki and is dating Madelyn. 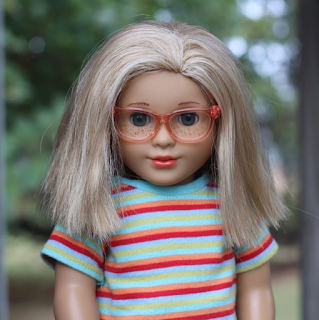 Marlee enjoys Disney, art, writing, and someday she would like to be a teacher, work for Disney, write and illustrate children's' books, or all three. She is pretty quiet and she likes to make friendship bracelets and other jewelry to sell in her free time. Her other hobbies include making pins, patches, and tiny books called zines. Marlee also plays the clarinet and the saxophone.

(Marlee is a Marie-Grace doll with a cut frosted blonde RRG wig and freckles.) 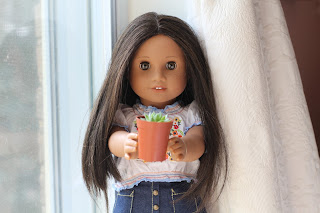 Maddie is cheerful, bright, and loves all things new and shiny, so everything pop culture. She's planning to go to college to major in computer science. Maddie is Violet's fraternal twin sister. Madelyn is the captain of the high school cheer team, and she's dating Piper. 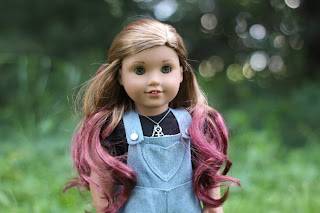 Maja likes fashion, parties, and adventure, she isn't afraid to do anything but doesn't see why she shouldn't look fabulous while doing it. Her favorite color is purple and she loves glitter, cacti, journals, poetry, and crystals. Maja is Kirsten's cousin. 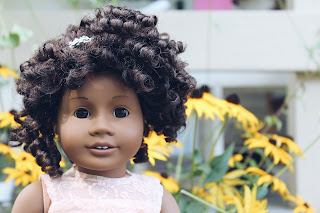 Lila is Marlee's adopted little sister, and she attended an art school in New York City until the fall of 2016, where she trained to become an ariel and trapeze artist. Lila's favorite color is yellow and her favorite flower is a daisy. Lila loves to explore and adventure with her friends, and she is known among the group for her upbeat personality and eternal optimism. She's Marlee's sister. 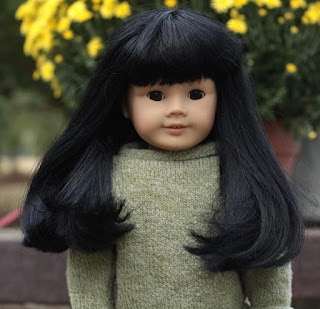 Claudia loves art and every piece of clothing she owns is covered in paint splatters. She can be messy and is a daydreamer, she is not very good at schoolwork but her creativity more than makes up for it. Claudia likes every color in the rainbow. She has already been scheduled to have her art featured in a local gallery! In addition, Claudia also loves fashion from the '40s, '50s, and '60s. Her parents are both teachers at Cedar Middle School.

(Claudia is an American Girl #4 doll) 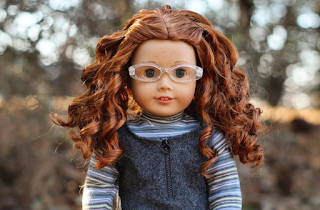 Georgia feels that she has grown a lot in the past year after coming out at her new school as transgender, having previously been bullied at her old school and in her old group of "friends". Someday, she hopes to be a singer-songwriter. She also enjoys learning about Irish culture, since her family is from Ireland- she even takes Celtic dancing lessons. Georgia is half-sisters with Eve. 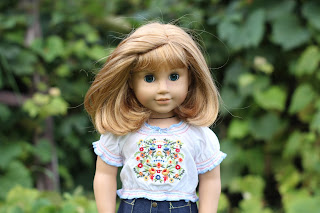 Called Gwen by most everyone, Gwendolyn is a daydreamer sort of girl who loves fairies and magic. Gwen is diagnosed with Takayasu’s Arteritis, a rare disease most common in teen girls and women that causes damage to the aorta, the main artery that delivers blood from your heart to the rest of your body. Fortunately, Gwen was diagnosed early in her life and the disease is under control by medication and no longer poses a threat to her everyday life. However, this is a chronic illness, meaning that you don't just "get better", and because of the medication she takes, it often makes her extremely fatigued. As a result, Gwendolyn often uses a wheelchair or a set of canes to get around without being in pain or feeling extremely tired.

(Gwendolyn is a Nellie doll.) 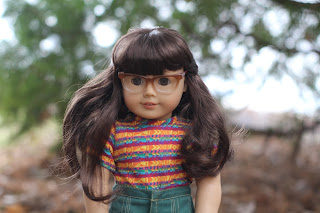 Ramona enjoys "retro" kinds of things like record players, polaroids, and roller skates, and she likes to go thrift shopping when she gets the chance. Ramona works at a riding stable in the summer and grooms the horses! She is very outgoing and is often the one who gathers friends together to go to events and hang out. Someday Ramona would like to be a textile designer and hopes to go to art school.

(Ramona is a BeForever Samantha doll) 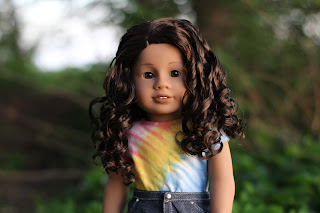 Clementine loves being in nature, and she also loves summer- it's when she feels most free and herself. She is on the school swim team and loves everything to do with the ocean. Jayne is the school's ringleader- she has every boy wrapped around her finger, and plenty of the girls, too. Jayne doesn't have a best friend, and she doesn't really mind. She's found that the more attention you get, the more you savor your time outside of the spotlight. Jayne is a cheerleader, and she was recently on the school's homecoming court. The other girls respect Jayne, but somewhat keep their distance as well- they just exist in different circles.

Rosanna feels like she can communicate a thousand times better in writing than she can by speaking. She tends to keep to herself, and while she does well in school, she spends her days anticipating the moment she can tuck herself away in her attic bedroom or in one of her many forest hideaways to write poems and stories. She is an only child and lives with her parents on a small farm, where they have chickens and a huge garden. She is quiet, and her best friends are her pet chickens and her cat. She loves to observe the other girls and imagine their lives but has always been an outsider of her own choosing. The others think that she's a little weird, but Rosanna doesn't mind, not much anyway. It's not until she meets Elijah that Rosanna finds herself compelled to make a true friend- something about meeting someone quieter than she is makes Rosanna determined to solve the mystery! Rosanna finds Elijah intriguing- she wants to know all about him but is too quiet to even consider being nosy, so she settles on befriending him instead. 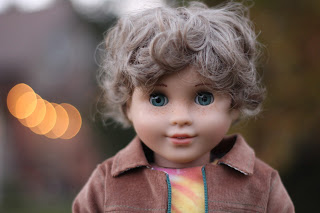 Elijah is quiet and has been dealt a bit of a rough lot in life. He works at George's Grocery and has always been homeschooled, so he doesn't really know many of the other kids his age on the island. He would probably consider Piper to be his best friend, although he is quickly becoming closer with Rosanna.

(Elijah is a Marie-Grace doll with a trimmed Monique Brittany wig.) 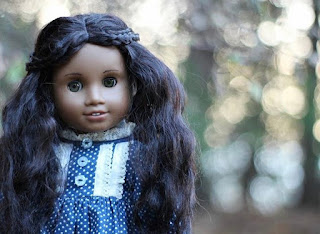 Cecile loves animals and writing fairy tale stories. Someday Cecile wants to be a writer or a veterinarian. She is quiet most of the time but isn't afraid to speak her mind or stand up for herself and others.

Clover loves spending time in nature, and is especially fascinated with the night sky- she hopes to become an astronomer when she's older!

Violet likes punk rock, the color black, and someday wants to be a cartoonist. She's also on the school swim team. She is fraternal twins with Madelyn.

Kirsten enjoys science and computers. She also likes to swim- she's the captain of the school swim team- and do water sports such as boating and jet skiing. She would like to be a boat captain or marine scientist when she gets older.

(Kirsten is a retired historical character.)

Nikki collects toys like My Little Pony and Disney Princess memorabilia. She would like to be a ballerina someday and takes lessons from Marlee. Her dream is to dance on Broadway. She also has a horse called Jackson. She's cousins with Piper.