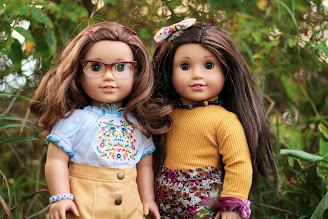 Hello everyone! It's Eve, and as promised, I'm back again with another installment of my family photos series! Today's subjects are the beautiful Rebekah and Jayne Thomas, two sisters who both attend Cedar High School.
Both of the Thomas sisters love to act. Rebekah, who is the younger of the two, is very good friends with my friend Mackenzie, who makes a lot of short films. Rebekah hopes to be a film and television actress someday, while Jayne, who has starred in many of our school's musicals, has the goal of being a professional stage actress. This past year at school, Jayne was crowned Homecoming Queen at school, and she's also a member of the cheerleading squad.
I hope you enjoyed learning more about these two girls! I have a few more family photos to share before this series is complete (Mackenzie and Clover; Georgia, Eve, and Flora; and Violet and Madelyn), and I hope to have them all up in the next week or so before school begins!
See you soon!
-Eve
at August 26, 2020